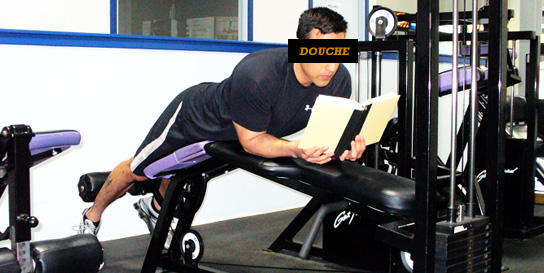 Why you’re annoying everyone at the gym

There is something to bitch about which irks me beyond belief nearly every time I set foot in the gym. I’m not talking about the personal trainers, the douchebags wearing nipple-chaffing muscle-tees nor the front-counter girl that holds less interest in swiping your membership card than she does about gently pressing her face against a sharpened knife.

No I’m not – I’m talking about the circuit trainer.

You know the type. Someone who’s adamant about using five pieces of equipment at once (during f*cking gym peak-hour no less).

I get a ‘Why the face?’ when i glare at these imbeciles who snap at me as I grab a piece of equipment from their inventory of items.

“Oh I’m sorry – were you using that? I didn’t see your towel. Oh wait, you don’t HAVE a towel. How are you going to wipe down the 342 dumbbells, benches and elastic bands you’ve seem to have acquired since walking through the door?”

It’s as if these people get up really early, stake out an area and then put up a flag.

“Sorry everyone, this is MY area of the gym. I’ll be here for a while too. I have ten sets of four hundred to bust out. Needless to say, that’s a f*ck-load of reps.”

Then explain why you’ve the arms of an ant and the legs of a chicken. Oh, that’s right. You’re training according to something you read in Mens Health about ‘Achieving Six-Pack abs in 4 weeks!’

There’s one such article here which talks about ‘fat burning meals and metabolism boosting workouts’. What a crock of sh*t. Thank god it’s from 2008. I almost had to clock myself in the mouth with the nearest Shake-Weight.

Let’s be fair here – there’s a myriad of d*ckheads at the gym that are just as guilty of self-obsession. Those being trained by a Personal Trainer are often guilty. Just yesterday I was asked by a girl if she could work in with my weighted chins.

Not a problem at all.

I surrendered the rope (which holds the plates) so she could adjust the weight. She then proceeds to stand there for 3 effing minutes, waits for her PT to arrive, then takes another 3 minutes to do her working set. Six minutes later, when I’ve cooled down and am having a coffee at a nearby cafe, I get to do my next set.

Work in with me sure – take over the f*cking area I was using just because Johnny Chimpo the Personal Trainer is busy on his cell phone? I think not!

Next time, you can wait until I’m finished, have gone home, showered and finished ironing my cranky-pants.

Until that happens or a blue moon suddenly springs from my backside, you AREN’T working in with me.

You’d think I would’ve learnt by now. People are notoriously ‘all about themselves’. I suppose it’s with fair point – it’s easy to become self-obsessed about your training when every magazine on the rack is telling you that you’re a fat ass.

If he stops lifting, then the terrorists have won

You may have seen me post this video on the Crude Facebook page the other day. It’s the height of self-obsession under the most dire of circumstances. Is this an episode of the Onion?

The point of this rant

There really isn’t one. Just be more aware of your surroundings when you’re in a public place and sharing common areas. I don’t want to have to snap a photo of you and add you to the gym douchebag hall of fame now do I?