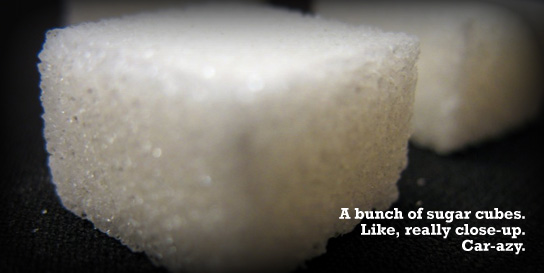 Why is fructose bad if it’s found in fruit?

It can’t be that bad if it’s found in fruit, because after all, isn’t fructose the fruit sugar?

That’s always the answer when I attack high-fructose corn sugar, or even common sucrose that’s half glucose, half fructose. How can it be so bad if it’s found in nature? Further, isn’t fructose really low on the glycemic index? Haven’t people said that it’s safe for diabetics to eat because of that? So what’s the big deal? Well, I dug a little deeper, and it turns out that it’s not nearly that simple.

So read on to learn why exactly fructose is a really awful thing to ingest, and why it’s not really a natural fruit sugar at all…

The sugar found in fruit is actually called levulose, and is bound up with so many different vitamins, amino acids and minerals that it qualifies as a different kind of sugar. Like glucose, it is digested through the intestine and enters the bloodstream. Fructose, however, in its commonly found commercial form, is stripped of all these good extras. It is highly processed, hydrolyzed and is not absorbed through the intestine, but rather is shunted straight into the liver. And that’s where things start to go wrong.

When fructose arrives in the liver, it is slowly turned into triglycerides, or fat, and from there released into the bloodstream where it is ferried away into our fat stores1. In 1992, Dr. John Bantle (Director of the Division of Endocrinology and Diabetes at the U. of Minn) reported that LDL cholesterol is elevated by as much as 10% when somebody goes on a high-fructose diet.

However, things get worse…

When found in sucrose or high-fructose corn sugar, fructose is always paired up with glucose. This is a match made in hell, because the glucose causes an insulin spike as your body seeks to normalize the jump in blood sugar. However, the insulin is unable to load the glucose into your liver (in the form of glycogen) because it’s blocked up turning the fructose into fat. Which means more insulin gets released to overcome the traffic jam, causing your insulin levels to go higher.

Over time, this can result in continuously elevated states of insulin, known as hyperinsulinism, which in turn can cause insulin resistance in your tissues. From there, it’s a one way ticket to obesity, diabetes, and heart disease.2

So why is fructose bad – should you avoid fructose, and sugar in all its forms?

Yes. Is fructose really a fruit sugar? Not really; it’s the heart of levulose, but the processed version is sufficiently different to be digested differently by your body.

What should you take away from all of this?

Don’t eat refined sugar. It will only cause you to gain fat, raise your insulin levels, and lead you down the wrong road to the land of illness.

Clint’s Note: As you’re probably aware (if you’ve read any of my previous articles on dietary restriction) I’m a realist when it comes to the consumption of seemingly ‘off-limit’ foods. My own personal view on the intake of sugar is one of ‘moderation’ (this includes fruit and refined sugars of any kind).

Avoiding refined sugar completely is a difficult thing to sustain in the real world. If you become ‘scared’ of it’s consumption, I think the mental anguish that could cause may do you more harm than what ingesting the sugar itself perhaps would. Use your common sense here.

Phil Tucker is a novelist and freelance writer who is currently based in Western Massachusetts. Of Brazilian British descent, he grew up in various countries throughout South America and Western Europe, and counts himself fortunate to have experienced different cultures and global points of view, all of which have informed his own. He's an advocate for the Body Beast workout. Click here to learn more, or visit his blog.