By Clint NielsenOctober 27, 2015No Comments

You wake up to find nachos strewn across the kitchen counter with no plate in sight and your laptop somehow ended up in the laundry basket. Either a group of college kids took over the house for the night or there’s a sleepwalker on the loose. 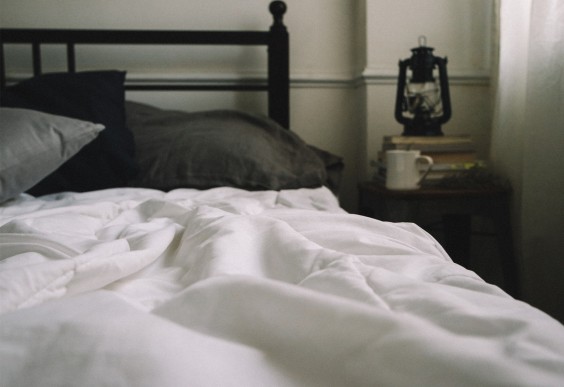 Sleepwalking is a kind of parasomnia, a fancy term for abnormal sleep behavior. About 30 percent of American adults have sleepwalked at least once in their life, and about 4 percent have sleepwalked once or more in the past year.1
Besides snoozing and strolling, other telltale signs of sleepwalking include opening your eyes without seeming awake and saying nonsensical things—sleeptalking, anyone? And while sleepwalkers usually do unremarkable things like take a stroll down the hall, others have been known to embrace their inner Julia Child in the kitchen or drive around the block.

Most sleepwalking episodes last fewer than 10 minutes, but whether sleepwalkers mumble about fairies or whip up a feast, they rarely remember anything about the episode once they wake up. The majority of sleepwalkers are kids, but there are still plenty of adults taking late-night strolls around the house. In fact, one recent study found Americans are more likely to sleepwalk today than they were in the 1970s.1
That’s possibly because more Americans take antidepressants now than 30 years ago, and some of those medications may cause the side effect of sleepwalking. (It’s also worth noting that people who suffer from severe depression are more likely to sleepwalk in the first place.)

Other sleepwalking culprits include alcohol, stress, and switching up your sleep schedule.2
Plus, malfunctions in the GABA system, which prevents movement during sleep, can (surprise!) lead to sleepwalking.3

If you're a bystander to a sleepwalker, common knowledge says you shouldn't wake them and instead guide them back to bed. Statistically speaking, only 2 percent of sleepwalkers are violent when roused, so the odds are in your favor if you accidentally wake your sleepwalking friend.

Depending on how significant the problem is, there are different strategies to combat sleepwalking. When episodes are a result of other medical problems, like sleep-disordered breathing, it’s important to treat those issues first.4
Some sleepwalkers benefit from psychotherapy, which can help them resolve the psychological stressors contributing to the sleep disorder.5
Another treatment involves anticipatory awakenings, or waking the patient up several nights in a row at the time when they usually sleep walk. (Sounds fun, right?)

If sleepwalking is a serious issue, consider seeing a doctor or a sleep specialist for personalized advice. Until then, throw on some Aerosmith and snooze away.