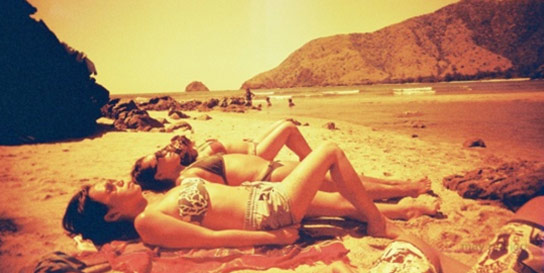 As we’re all aware, there’s an ample supply of douche-bags in the gym.

What happens when these crazy bags of douchiness break free from their natural health-club habitat and descend upon the masses at the beach?

You get a whole bunch of new ways to annoy the living be-jesus out of a crowd of people trying to enjoy themselves in the sun.

He’s buff, he has style, he even has baby-oil covering his 12-pack. He’s more than likely the douche from the gym that was wearing jeans and flip flops whilst attempting a 400lb bench press.

What he hasn’t realised is, that his euro-shorts have revealed his severe trowser-snake inadequacy. This has been further emphasized by his broad shoulders and that ‘hey bro, look at my biceps’ stance.

‘Business’ up top — ‘Ken-doll’ downstairs is a no-no in anyone’s book. When you’re built like a 3 year-old boy, maybe it’s time to ship your euro-shorts back to Europe.

They’ll stand in one spot, eyeing the beach up and down, shifting their stance repeatedly at just the right angle to an invisible crowd of adoring fans. In their minds, there’s a roar descending from an imaginary, giant grand-stand just as they’re about to receive the gold medal for The World’s Biggest Poser.

Yes we all noticed how conveniently your flexed your bicep as you pointed towards the drink machine. No I don’t think you’re amazing – I want to insert beach umbrellas into your eye socket.

‘My girlfriend Stacy wears a spaghetti thin bikini, so I thought I could too’. Wrong. Dressing for your body type is a MUST no matter where you are let alone when you’re at the beach where its pretty much everyone running around in their (wet) underwear. Whether you need to wear a one piece, a two piece or several hundred pieces stitched together to form a tent, please dress appropriately.

Everyone from the bakery called. They want their ‘Rolls’ back.

That goes for you too Michelin Man with the extra-small speedo. Apparently you’re circumcised. Excuse me whilst I bleach my eyeballs.

#2 The too close for comfort

Ever dropped your towel down and made yourself all set when suddenly, a group of people sit RIGHT next to you? There’s this little thing called ‘personal space’ and you’ve just invaded it like a fat kid raiding a castle made of cotton-candy. I don’t need to be subjected to the conversation on how many chicks you ‘sha-lammed’ last night, or the fact that you’ve been trying the latest in Nair hair-removal creams.

Move over, shutup and stop disturbing my bliss. And by ‘bliss’ I mean ‘awesome’.

So you’ve been sitting in the sun for about 50 years now. Most commonly these kinds of people are referred to as ‘sun-worshipers’, but their resemblance is closer to a leather hand-bag. You’ll see them ‘tanning’ for hours at a time, almost to the point where even their eyeballs are lacking enough moisture to keep them from shutting permanently. Your charred complexion isn’t sexy, or alluring. It makes me want to skin you alive and turn you into a motorcycle jacket. Thats right — I AM Buffalo Bill.

How is any of this related to fitness or training? I hear you say. It isn’t. Now back to work people.

Clint’s Note: What bugs you at the beach? Comment below.