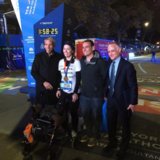 Long after the crowds had gone home and the other runners had showered and were settling into their celebratory dinners, Saskia van Waaijenburg crossed the finish line of the NYC Marathon using a walker to aid her. Waiting for Saskia were a handful of volunteers who stayed long past the race's official cutoff time to ensure that every participant received a medal. Saskia's boyfriend – who finished the race four hours prior – was also in her cheering squad.

Just over a month ago, Saskia underwent spinal surgery. And despite the many obstacles – both physical and emotional – that she faced during her recovery, focusing on the upcoming marathon helped give her the will to live and push on. It's hard to not get choked up while watching Sakia's finish and reading her emotional letter. It's just further proof that a marathon is so much more than a foot race.