This Video of a Pregnant Woman Doing Handstands Will Make Your Jaw Drop – but Is It Safe? 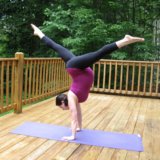 Hold on to your yoga mat because you are about to see some pretty advanced poses, and this isn't from an ordinary yogi – this woman is 39 weeks pregnant. Backbends, handstands, splits, crazy arm balances, and forearm stands – these would be challenging for anyone, but with a full-grown baby taking up all the room in her belly, it's amazing she can do any of this.

This woman obviously had a strong yoga practice before getting pregnant, and doctors say that it's usually OK to continue with your exercise routine, as long as it doesn't put you or the baby in harm's way. Yoga is a great way to keep the body flexible and the mind relaxed, but some poses are off limits, such as deep forward bends and twists, and hot yoga is also a no-no to avoid dehydration. Yoga instructors would also recommend that pregnant women new to yoga avoid inversions because of the risk of falling, since the extra weight in the belly can make it harder to hold yourself balanced. But this woman looks insanely strong and capable of holding herself steady.

We asked Susan Cline Lucey, a pre- and postnatal yoga instructor and doula (someone who assists a pregnant woman during birth), for her thoughts on this advanced yoga practice. Her verdict? "All of those poses are not new to her or new to her body, so I wouldn't say they are specifically all bad," Susan said. In fact, Susan noted that this woman's backbends look even, so she's not just bending in her lower back, meaning "she obviously doesn't have any physical instabilities due to her pregnancy."

Susan did say that doing all of these ab-related poses are cause for concern. During pregnancy, the ab muscles get stretched so much that they can separate (a condition called diastasis), which means the uterus, bowels, and other organs have only a thin band of connective tissue in front to hold them in place. This can lead to lower back pain, urine leaking (what else is new?!), and risk of the organs poking out (a hernia) and can make a vaginal birth more difficult. Exercises that target the core can make the separation worse, which is why ab exercises such as crunches and planks, yoga poses like backbends that overstretch the abs, and heavy lifting should be avoided. Susan said by the looks of this woman's backbend, it appears her ab muscles "are coning some," which is an indication of separation.

Another thing to consider is relaxin, the hormone that courses through a pregnant woman's body that's responsible for loosening up the muscles, joints, and ligaments. It's supposed to help the body expand gracefully while growing the baby, as well as make birth easier. This softening can cause joints to be unsteady, which is why it's harder for expectant mommas to do balancing poses, especially inversions. Since you feel more limber, poses like splits and hip openers may feel easier, but overstretching muscles can cause injury.

But the number-one question is, what about the baby? It's difficult to say whether this advanced yoga practice is causing harm. Susan said that "babies are resilient as well as the home (meaning the womb)," but this woman is doing some crazy stuff! This wouldn't be something Susan said she would recommend to her students, saying that the end of pregnancy should be about relaxing and respecting the body and there's no need to do such a fiery practice. But every person is different – some women lift weights or run marathons while pregnant. So as long as your doctor gives you the green light and the safety of the baby is your first consideration, momma knows best.