The Total-Body Mixed Martial Arts Workout Anyone Can Do

Today, the professional fighter is just about everywhere you look. But one year ago, her name might not have rang a bell if you weren’t a die-hard fan of mixed martial arts (or the Expendables movie). Now, after Rousey won three blink-and-you’ll-miss-it fights (all lasted less than a minute) and body-slammed Michelle Rodriguez in Furious 7, people are finally looking at mixed martial arts (MMA) as more than an excuse for hulking dudebros to beat each other up. Could brawling be… empowering?

Put Your Hands Up 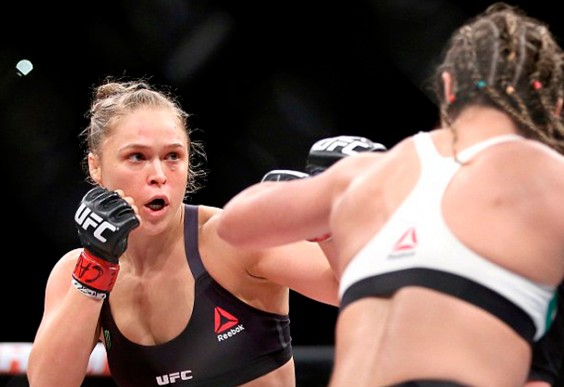 Getty Images Contrary to what you may think after watching a UFC match, most countries have historically viewed martial arts as a means for self-development first and self-defense second. China’s Shaolin monks, for example, have always seen kung fu as a physical expression of the intense focus and mental fluidity necessary for spiritual enlightenment. (Nothing like the threat of being punched in the face as a way to stay in the present moment!)

Today, MMA is a full-contact sport that combines multiple fighting styles, from boxing to Brazilian jiu-jitsu. It encourages a practitioner to scour the world’s traditional martial arts, take what works best, discard what doesn’t, and fuse them into a fighting style that’s as effective as humanly possible. (While impressive, the acrobatics of those Shaolin monks might not always be useful in a street fight.) Some of the most common styles that have risen to the top of the MMA stew include Muay Thai for striking, judo for takedowns, and jiu-jitsu for ground fighting.

Now the fastest growing sports organization in the world, the Ultimate Fighting Championship (UFC) was originally inspired by the brutal “vale tudo” tournaments of Brazil—which in Portuguese means “anything goes”. And well, just about anything went. But after 20 years of legal scrutiny (in fact, professional MMA is still illegal in New York), fighters can't bite, stomp, twist fingers, pull hair, or attack the groin, throat, or spine. (Here’s a more complete list of no-nos for the curious.)

There’s not a single muscle in my body that isn’t for a purpose. — Ronda Rousey

We could spill a lot more ink on why strength and self-defense are vastly underrated ways to improve lives of women and men, but Rousey probably put it best herself: “I think (my body) is femininely badass as f*ck because there’s not a single muscle in my body that isn’t for a purpose.”

After all, MMA isn’t just about beatdowns—it’s about getting in the best shape of your life, explains Christian Defiris, a mixed martial artist and head trainer of New York’s Elite Combat and Fitness gym.

“Mixed martial arts is, hands down, the best way to train for muscular endurance, burning body fat, and building functional muscle,” he says. “It’s about longevity, strength, and conditioning all together, because we get the body strong as a unit.” Meaning: Even if you’re not interested in learning to defend against (or beat up) people bigger and stronger than you, this sport has a ton to offer anyone looking to get into better shape.

The key to getting into fighting shape: high intensity training (HIT), which combines strength and cardio into one exhausting but very satisfying sweat sesh. Defiris believes the secret to getting a fighter’s lean body, superb strength, and incredible cardiovascular fitness is the frenetic, fast-paced nature of their workouts. “We’re in such great shape because we don’t rest,” he says. “The heart rate does lower a little during the abs exercises, but we minimize downtime as much as we can.”

This workout is a perfect example and a good place to start. The best part: All you need is the humble medicine ball. Defiris recommends an 8-pound ball for beginners, 12 pounds for regular gym-goers, and 15 to 25 pounds for more experienced athletes.

Perform the following exercises in order for the prescribed amount of time. Complete the full circuit a total of 3 times, resting 1 to 2 minutes between each round. The whole workout should take about 20 minutes. Do it two times per week and increase the weight of the medicine ball every few weeks. You’ll be fighting fit in no time!

Hold a medicine ball in front of your pelvis, push your hips back, and sink into a deep squat (as if you just picked up the medicine ball off the ground). Reverse the movement, curl the ball up underneath your chin, then press it overhead. Return to starting position.

Take a step forward and bend your leg slightly, about 45 degrees, so your knee is over your ankle in half-lunge. (This helps with balance and engages your core and lower body, Defiris says.) Press the medicine ball overhead and bend your elbows backward until the ball is behind your head. Lengthen arms back up. 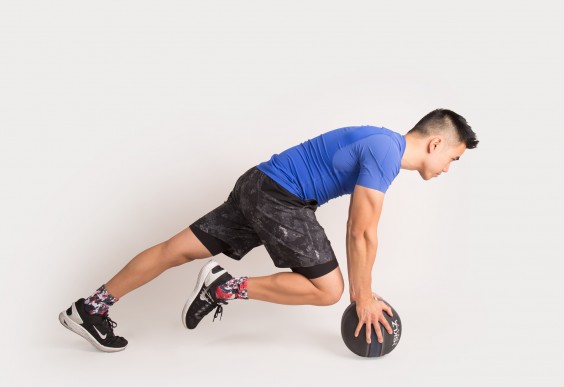 Start at the top of a push-up position, but with your hands grasping the medicine ball. Keeping right leg straight and your core tight, bring left knee in toward your chest. Then quickly bring the left foot back and bring your right knee forward, so your legs have switched positions. Continue alternating.

You know the drill, but here’s how to intensify your push-up game with a medicine ball.

Lie faceup on the floor, put your hands behind your head, then bend your knees until your thighs are perpendicular to the ground and your shins are parallel with it. Keeping lower back on the ground, lift upper back up and slightly forward.

Same idea as above, but twist as you sit up. Aim to touch your elbow to the opposite knee each time. 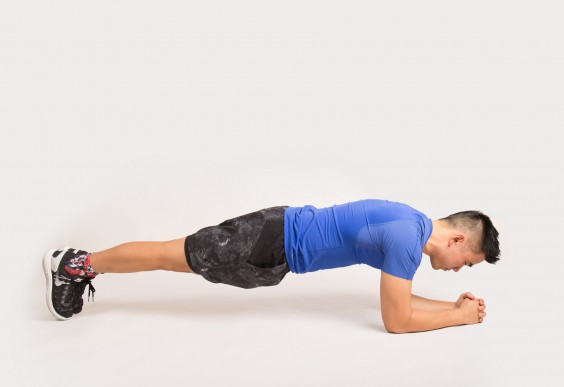 Lie facedown on the floor with feet together and forearms on the ground. (Push up onto your hands if that’s too tough.) Draw abs in and tighten glutes. Lift entire body off the ground until it forms a straight line from head to toe, resting on forearms and toes. 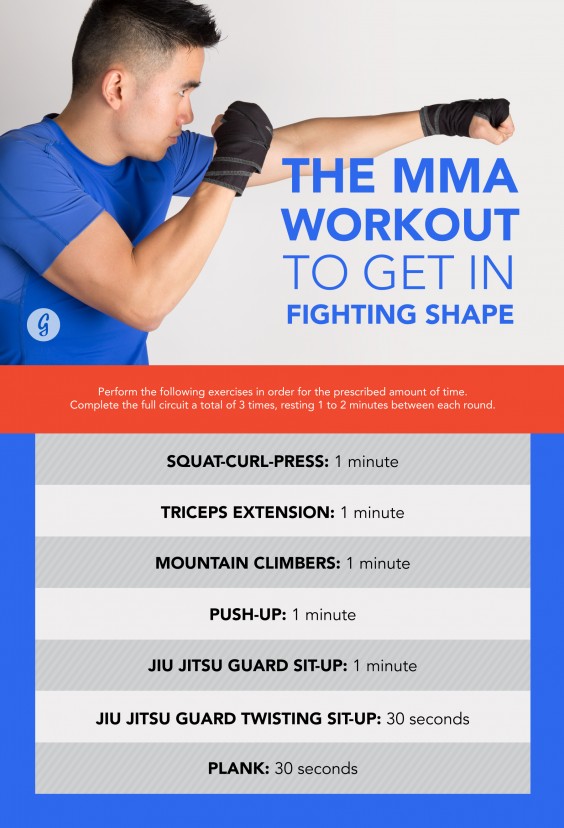