The Real Difference Between Agave, Honey, and Other Natural Sweeteners

In the never-ending, always-confusing battle of good versus bad foods, we may not be sure where wheat and saturated fats stand today, but there's one thing we would all probably agree on: Sugar is the devil. And since we love our sweets (in fact, humans innately crave sweet flavors), it would be best to ban the white stuff and appease our appetites with so-called “natural” sweeteners.1

It makes sense if you believe the hype: Some of these sugar substitutes have vitamins and minerals; others prevent the roller-coaster blood sugar response that's typical of sugar; and—of course—all of them are natural! So they've got to be better for you.

Except that they're still sweeteners—and many of those “health benefits” are minuscule (at best) at the doses you should be eating. Plus, not everything works in every recipe (go ahead and try sweetening coffee with whole dates). Let's break down some of the most common types of natural sweeteners so you can decide what's best for you. 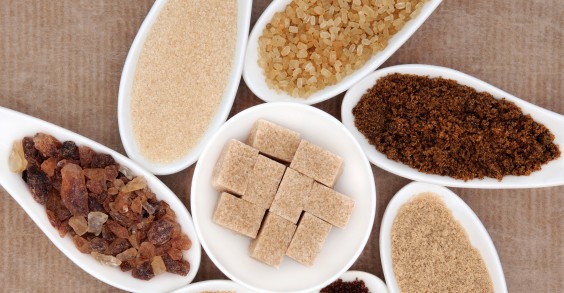 What it is: Since it doesn't undergo bleaching and some other processing, sugar in the raw is darker in color and has a richer, more caramel-like flavor than table sugar.

Is it better for you? Less processing also means it retains tiny amounts of minerals like calcium and iron—but there’s less than a milligram of either in a teaspoon, says culinary nutritionist Rachel Begun, R.D.N. Like white sugar, that teaspoon also comes with 16 calories, and both sweeteners are made by boiling and evaporating cane sugar juice to form solid sugar crystals, so your body processes them in the same way, Begun says.

What it is: A syrup derived from the agave plant (yup, the same one that’s used to make tequila). It’s about as sweet as honey, but with a slightly thinner consistency.

Best uses: Stirred into tea or drizzled over yogurt or oatmeal, though you can bake with it too. Since it’s slightly sweeter and contains more moisture than sugar, use about one-third less than you normally would.

Is it better for you? Nutrient-wise, agave doesn’t have much to offer, and it’s slightly higher in calories than white sugar, with 21 per teaspoon. Your body also processes this liquid differently: White sugar (a.k.a. sucrose) is 50 percent fructose, whereas agave nectar contains around 84 percent fructose, though exact amounts can vary by brand.1
Sweeteners that are high in fructose have a lower glycemic index than sucrose, so it’s less likely to cause blood sugar spikes. For that reason, agave is sometimes favored by diabetics. The downside? Fructose can only be processed by your liver. When you take in more than what the liver can handle, the extra gets turned into fat.

“People think agave is healthier because it doesn’t raise blood sugar levels, but some emerging research shows a connection between high fructose intake and insulin resistance and cardiovascular disease,” says Alexandra Caspero, R.D., founder of the Delish Knowledge blog.2
“The fructose disrupts normal liver metabolism, leading to higher rates of lipogenesis and higher triglycerides—both of which can lead to heart disease. I recommend avoiding agave when possible.”

What it is: Syrup that bees make by regurgitating flower nectar and letting it evaporate. (That's right, it’s dried bug puke. Appetizing.)

Best uses: The same as agave.

Is it better for you? Whether raw (unpasteurized) or not, honey provides 21 calories plus trace amounts of vitamin C, magnesium, and antioxidants per teaspoon. “It’s often considered a better choice than refined sugar, but it isn’t a significant source of nutrition,” Begun says. Honey does contain more fructose than table sugar, but not by a landslide, so Begun says it's no worse than the white stuff. If you have trouble digesting fructose, though, honey may cause you to experience gas or bloating, in which case you may want to limit or avoid it completely, Begun adds. 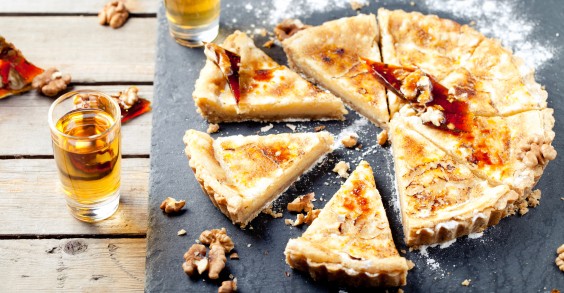 What it is: Sap from the maple tree that’s been boiled until thick. (Note that it's different from pancake syrup, which is basically table sugar in liquid form.)

Best uses: Maple syrup has a rich, distinct flavor that’s delicious in both sweet and savory dishes. As with other liquid sweeteners, cut down the amount of sugar you'd use by one-third to substitute it in baked goods.

Is it better for you? Maple syrup contains minerals like zinc, calcium, riboflavin, and magnesium, as well as a range of antioxidants. But you’ll only get tiny amounts (we're talking less than 1 percent of your daily value) in a spoonful of the stuff, so it’s not exactly a health food. Calorie-wise, it’s about the same as white sugar, and because maple syrup is an equal split of glucose and fructose, your body processes the two sweeteners in a similar way, Caspero says.

What they are: Fruits from the date palm tree. Dates can be eaten fresh, but unless you live in a region that grows them (such as southern California or the Middle East), you’ll usually find them dried. They’re sticky and chewy and taste a bit like caramel.

Best uses: In smoothies or homemade nut milks, where it’s easy to purée them in the blender.

Is it better for you? “Dates are a whole food, so they actually contribute nutrients, particularly fiber, to the food they sweeten,” Begun says. One 20-calorie date contains about a gram of fiber—not much, but it’s better than other sweeteners, which have none. (But don’t get too excited about the small dose. Many of the foods table sugar is added to already contain fiber.) Dates also have small amounts of calcium and potassium.

What it is: Sugar that’s made from the sap of the coconut palm tree.

Best uses: Taste- and texture-wise, it’s a lot like brown sugar—and you can sub it one-for-one in recipes.

Is it better for you? Like maple syrup, coconut sugar contains trace amounts of minerals such as potassium, phosphorus, magnesium, and calcium. But you’d have to eat at least 1/4 cup to reap the benefits, which is way more sugar than anyone needs in a day, Caspero says. (Women should stick to less than six teaspoons of sugar per day, and men should max out at no more than nine teaspoons.) “Because coconut sugar contains less fructose than white sugar, your liver metabolizes it in a healthier way,” Caspero says. That means less potentially turns into fat. But since coconut sugar is higher in sucrose, it still raises your blood sugar.

What it is: To make this sweetener, leaves of the stevia plant are dried, and the concentrated extract is filtered and turned into powder or liquid. The final product is 300 times sweeter than sugar, and some people complain that it has a bitter aftertaste.

Best uses: Smoothies, coffee, or puddings—since it doesn’t caramelize like sugar, it can be tough to bake with. For every teaspoon of sugar, swap in two to three drops of liquid stevia or 1/4 teaspoon powder.

Is it better for you? Stevia is probably most known as a natural zero-calorie sweetener—but since it doesn’t contain any calories, it doesn’t deliver any nutrients either. No calories also means it has no effect on your blood sugar, however powdered stevia sometimes contains sugar alcohols, a type of carbohydrate that can be tough to digest. “They can cause stomach discomfort for some people, like those with IBS,” Begun says. If sugar alcohols are problematic for you, look for stevia made without sugar alcohols.

No type of sweetener is a health food—and the fact that one contains minuscule amounts of nutrients isn’t license to eat endless amounts of it. Plus, since most of us aren’t eating sugar by itself, the way the sweet stuff impacts your blood sugar depends on other factors. “Blood sugar levels are affected by mixtures of foods. It’s the whole meal that matters,” Begun says. For example, a spoonful of honey in protein-rich Greek yogurt will spike your blood sugar less than the sugar in a cookie made with white flour will.

So eat sugar sparingly, and pick your sweetener based on what tastes best to you. “Advocating for one sugar over the other misses the point,” Begun says. “As a society, we eat way too much added sugar, and they should all be limited and consumed in moderation.”