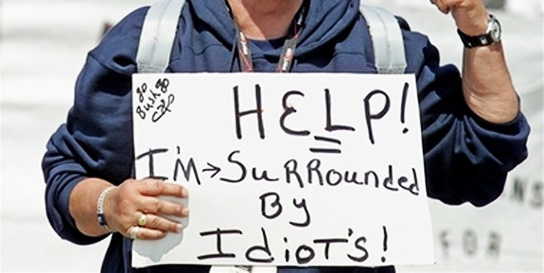 Is your laziness causing you progress suicide?

I’ve come to the conclusion, that tonnes of people are just plain lazy

Sure it’s a broad statement – but I think you’ll find it’s more true that not once I start picking apart the cotton wool that surrounds your perception of society. Firstly, people don’t read emails. They just don’t. They might ‘receive’ the email, then glance over it. That’s where it ends. It’s fricken laziness people – Read the f*cking email, then I won’t need to explain myself 10 times over, nor will I have you email me back in a week asking a question that’s already been answered by the f*cking Bible.

People can’t seem to clean up after themselves either

It’d appear that I’m commonly surrounded by a pack of Greenhouse retards.

Is ‘pack’ the correct collective noun here? Perhaps it’s a Gaggle of Greenhouse retards. I have a team of highly capable chimps working around the clock looking for an answer to that one – I’ll get back to you.

Wait, where was I? Oh yes, the recycling inept. Putting your pizza boxes inside of plastic bags before throwing them in the recycling bin is NOT classified as recycling. Oh I guess someone ELSE can save your lazy-arse and remove the plastic bags for you. You’d like that wouldn’t you. Why should you do it after all?

You have better things to do like trimming your nose hairs and donating your sperm to science. Everyone from Green Peace rang and apparently, YOU’VE FAILED. 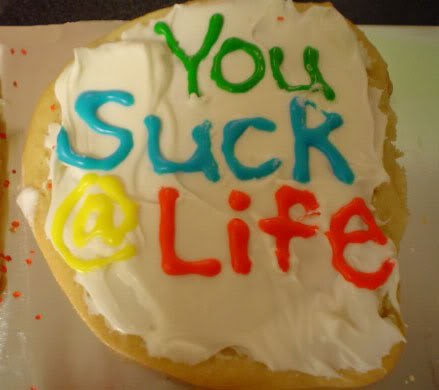 I baked a cake for you. In your honour.

How many times have you been to the gym and tripped over weights some d*ckhead’s left scattered about the gym floor in a ‘bird-trying-to-nest’ kinda way.

Sure, you need every dumbbell increment from 5kg’s up to 12.25 kgs just to make sure noone else in the gym has a weight to choose from. Oh I completely get that, you douche-bag – I don’t, however, get how your opposable thumbs suddenly became redundant and you’re incapable of putting the silver-weights back to where you found them. Oh wait. You DID put the weights back – only on the rack RIGHT in front of you. That’s nowhere near where they need to be, now is it?

Heaven forbid that someone looking for a poundage befitting for ANTS would be able to find what they’re looking for!

Oh, but the carnage continues…

How about the pool of sweat that was left on the nearby bench that you were just about to throw your towel over.

Oh, I’m sorry – not everyone needs to take a towel to the gym.

Could it be that you don’t sweat? Hang on a second, maybe your sweat smells like roses and freshly baked cinnamon rolls. Perhaps couples all around the world should be donating their first born children to you and tattooing your initials on their grandmothers foreheads in size 200pt Helvetica to show respect to someone incapable of harboring sweat glands.

No towel required then. As you were – oh enlightened one. Here’s a thought – maybe you’re just too lazy to WASH you’re own f*cking towels, let alone take one to the gym.

This brings me to my point…

Yes there’s a point to my rant.

Being lazy with your own health and fitness is progress suicide. If you aren’t capable of putting in the effort, you’re going to fail. MISERABLY.

This means, eating and training like a b*tch when you damn well KNOW you should be. Sure you could eat that cupcake and skip the gym this morning, but your laziness and penchant for baked-goods will have you swinging those tuck-shop-lady-arms and thunder-belly around the mall quicker than you can say adult onset diabetes.