How to maximize bad eating habits during the silly season

You spend all year training hard and refining your physique, and when it comes time to relax and enjoy the fruits of your labour with some much needed rest and time with the family, we are told that it’s ‘not ok’ and that you shouldn’t be letting your guard down.

The ‘proof’ is in the media

Just flip open any one of your trashy mags (I know you have some) and you’ll be sure to find any number of articles written on subjects such as ‘How to prevent gaining fat this Christmas Period’ or ‘The Top 20 ways to avoid becoming Santa’.

Just recently it dawned on me that maybe, just maybe, an alternate perspective on the situation was needed.

Can’t we make the ‘most’ of this time, rather than succumbing to pudding, turkey and egg-nog abstinence?

Name the only time you EVER want to be in a caloric surplus? (I bet you can).

That’s right — it’s when you’re trying to add ‘muscle’ to your frame.

Maintenance and fat-loss a flawed approach?

Whilst a lot of people will be trying to ‘maintain’ their current shape and weight, others will be desperately trying to lose fat during the lead up to the extended beach and pool time over the festive season (I’m talking to those south of the equator here).

Whilst both of those goals are completely fine to have, they can be potentially unrealistic this time of year.

Maintenance is probably the easier of the two (especially if you don’t drink alcohol), but losing body fat during this time (if you have an active social life), can be next to impossible for those that are lacking even one tiny iota of willpower.

Switch your training to hypertrophy

If only that was the case.

Whilst you need to ingest more calories than you expend in order to gain mass, it’s critical that a few key factors are adhered to:

What about for women?

This idea is gender agnostic and will work for both sexes. I’ve written about the difficulties women face in regards to building muscle due to hormonal profiles numerous times before (and it’s a discussion for another article).

However, rest assured that the farer sex will have a pretty hard time becoming a huge, muscle-bound gorilla with some minor ‘tweaks’ to training (especially over a one-month period that I’m suggesting).

It’s the rep range that’s been proven to offer the most bang for buck in regards to building muscle. The increased time under tension will stimulate sarcoplasmic hypertrophy (muscle growth) especially when coupled with shorter rest periods (as mentioned previously). 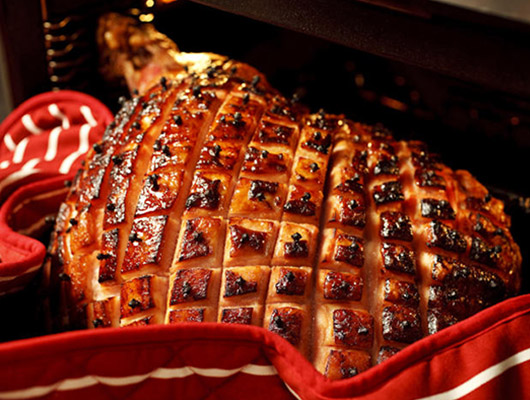 Who can resist the Christmas Ham…

This part should prove to be a no-brainer. You’re probably going to be susceptible to canapes and finger-food throughout the month of December (due to office Christmas parties and the like). Add these ‘extra’ calories to your ‘already solid eating plan’ and you should have no trouble reaching your macronutrient requirements each day/week.

Note: Make sure to lower your carbs on non-training days, and replace them with ‘good’ fats. No need to re-fill the tank of your car when you aren’t driving anywhere right?

Alcohol intake is arguably the deciding factor that will tip your surplus of calories from ‘muscle gains’ into ‘fat gains’.

It is for this reason, you’ll need to find a ‘balance’. By that I mean — if you KNOW that you’ll be drinking copious amounts of red wine during a Christmas party, then abstain from eating heavily throughout the earlier part of the day.

Sure, you have a good chance of tipping your caloric intake into ‘more than a surplus’, but at least the negatives will only be ‘slight’ and you’ve given yourself a fighting chance.

Train consistently and with intensity

What often follows closely behind parties and family gatherings, is a sudden lack of motivation to train or time to do so.

I’m not saying that taking a week off here and there is a bad thing (not by a long shot) — rather that you can still push through this period and fit in some form of resistance training at least three days per week whilst being in a caloric surplus.

Maximise your intensity in the gym

When you DO have time to train, make sure you’re training yourself with maximum intensity. Half-assed workouts will doing nothing for muscle growth, and will more than likely have you pack on ‘pounds’ in the form of fat rather than muscle.

I’ll probably be lambasted for even trying to promote such a mindset — Telling people to potentially over-eat and drink to excess.

I’m not suggesting that at all.

I call it ‘making the most of a less-than-ideal situation’.

If you’re a long-time reader, you’ll know that I’m a realist in every sense of the word — and at this time of year I’d rather be rewarding myself rather than ‘feeling guilty’ (naturally without undoing all of the year’s hard work :)).

Sure you may add a little bit to the waistline come December 25th, but hopefully you’ll have added some muscle at the same time. You can always switch to ‘fat burning’ mode during January right?

Life’s too short after all.

What are your goals for the impending ‘Silly Season’?
Think you’ll switch to muscle-gain, fat-loss or maintenance? Comment below.