By Clint NielsenOctober 26, 2015No Comments

Tonic water is a bit of a misnomer. Sure, the bubbly drink starts out as carbonated water, but most store-bought varieties add fruit extracts, sugar, and quinine (a bitter alkaloid once used for medicinal purposes) to boost flavor. So when you add four ounces to a standard cocktail, you'll be sipping on 11 grams of sugar—just as much as if you poured four ounces of Sprite. 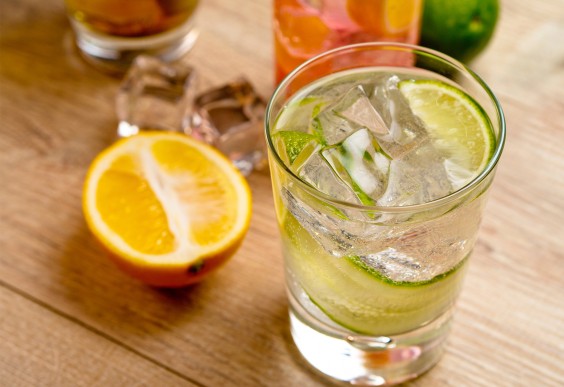 By now, we know that soda is one of the major contributing factors in the nationwide obesity epidemic, especially since half of all Americans down at least one soft drink every day.1 Studies have found that calories from soda influence weight gain more than calories from food.2 That's thanks in large part to the fact that sugar-sweetened beverages don't stimulate fullness the way food does.

Tonic water seems like it would be in a different class than the soft drinks we think of when we hear those kinds of statistics. But take a gander at the nutrition labels on bottles of tonic water and Coke, and you'll notice the two have an almost identical number of calories. Obviously, most of us consume Coke and tonic water differently—using just a few ounces of the latter to complement cocktails. So while the first gin and tonic isn't something to worry about, the added sugar becomes a concern when you're on your third or fourth.

Unfortunately, making healthier choices isn't as simple as opting for diet tonic water. One 10-year-long study found that daily diet soft drink consumption (yup, that includes tonic water) was associated with an increased risk of stroke.3 Plus, research has suggested calorie-free sweeteners may mess with the brain's ability to interpret how many calories we consume—causing us to eat more.4

Instead, reach for seltzer, which is usually straight water with bubbles. Add a squeeze of lemon to enhance the flavor, and if you're using the seltzer as a cocktail mixer, toss in a few bitters to mimic the taste of quinine.