By Clint NielsenNovember 1, 2015No Comments 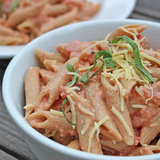 Penne alla vodka is an Italian staple that heavily lays on the cream and calories. After years of searching for a healthier alternative that actually tastes good, this recipe seemed too good to be true. Even without the booze and significantly less dairy thrown into the pot, this sauce brings the same tangy flavor and comforting texture that are indicative of the original. Just one bite will make you a believer.

Adapted from Cook Yourself Thin by Lifetime Television