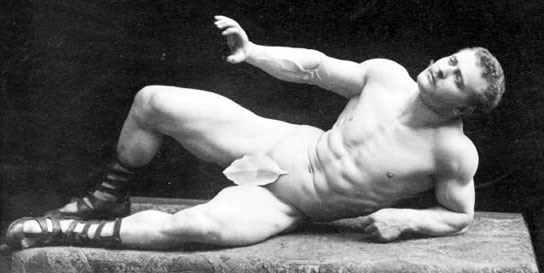 In today’s world, there is a significant freak-show aspect brought about by steroid use, where-as in the days before steroids even existed, the worlds biggest and strongest man was a lot smaller and would barely be a pimple on the back of Ronnie Coleman.

Ok, so I exaggerated that a TINY bit. Yes. Tiny. Like tiny, raisin-testicles.

In all seriousness, the worlds strongest man of yesteryear could still kick the ass of today’s breed of gym-goers even WITHOUT supplements, nutrition timing or fancy training equipment 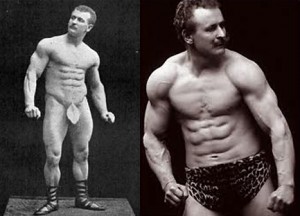 Who is this originator of muscle I speak of?

It’s none other than Eugen Sandow.

Before Arnold came along, Sandow set the Golden Standard in bodybuilding.

Eugen Sandow was born in Königsberg, Prussia in 1867 and is often referred to as the “Father of Modern Bodybuilding“.

He created the Institute of Physical Culture, an early gymnasium for body builders in 1897 and held the first major bodybuilding contest at the Royal Albert Hall on September 14, 1901.

He had a killer physique that even by todays standards, is HIGHLY impressive.

Surely he was on steroids?

He died a long time before steroids even existed. If he had any ailments such as mini-scrote, backne (back-acne), short-fuse or bitch tits, they were more likely due to the standard of drinking water or lack of decent contraception.

Just imagine what Eugen Sandow would have looked like after a spray tan, some baby oil and a decent personal trainer.

What type of training did he do?

Back in those days, bodybuilders used weights but they also incorporated bodyweight exercises and isometrics.

Sandow talked about working out with 200 pound dumbbells as if they were run of the mill 25 pounders.

If you’re interested in Sandow’s full story and his routines, check out his book.

[This is a great piece of vintage (1903) footage shot by Thomas Edison, showing legendary oldtime strongman Eugen Sandow performing several of his poses.]

I’m in no way implying that today’s bodybuilders aren’t impressive nor train like crazy sons-of-b*tches (even if they are on the juice). I’m just a lot more impressed with guys that did it on their own without supplements, steroids or crazy ‘advanced’ routines. These guys had the basics, and used them to their maximum capability.

Eugen Sandow is a true inspiration to us all.

Editor’s Note: Who inspires YOU to train? Comment below.