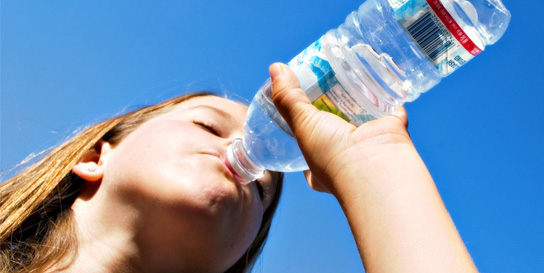 Drinking water at meal times might be a bad idea

Drinking water at meal times might be a bad idea

“I drink 4-5 gallons a day—I still have a spare tyre and eat cakes in my sleep, but at least I have that water thing covered”

I see it in comment threads everywhere aswell as blog posts

Sure, it’s healthy to drink a sh*t-load of water on every day ending in the letter ‘Y’, but I more interested in people becoming aware as to why they are drinking so much water and not only that — making sure their water intake is timed around set periods of the day.

So why is drinking water at meal times a bad idea?

The old-school mantra of ‘washing down your dinner with a glass of water’ does in fact, do you more disservice than good. Downing a glass of water during or post-meal times dilutes the acid in your stomach, which is used to break down the food you ingest.

Before you know it, you’re belching and you’re not sure why. Indigestion anyone?

More often than not, you’ll keep drinking MORE water to rid the indigestion when it will probably make it worse. I’m guilty of this myself. It’s an automatic reaction that’s been instilled in us by our parents, and their parents before them.

This will ultimately hinder your muscle-gain

If you’re on a mass-building program, you might wanna write this one down. Minimal food break-down by stomach acids leads to less than average digestion.

If your body isn’t given the best chance of absorbing the nutrients you’re feeding it, you’re severely short-changing your progress in the gym.

Time most of your intake around your training and before meals

This might seem like common sense, but I’m going to spell it out here anyway. Studies have shown that drinking water BEFORE meals does aid in weight-loss.

Because it fills you up somewhat prior to eating, thus preventing you from eating several hundreds of extra calories you would have normally eaten. Not really the rocket science you were looking for was it?

I know — I was disappointed too.

What else can I drink with a meal then?

Green tea has been shown to aid in the digestion process. I wouldn’t given up drinking red wine with my meals when I go out for a steak either.

To sum it up

By all means, you should be drinking a heap of water on your path to fat-loss. You just need to make sure you put down the jug whilst you eat your meals.

Finding it difficult with your 8 meals a day meal plan to do so? In coming weeks, I’ll be showing you how the 3 meal-a-day option can work for you and help you shift the MOST stubborn fat of them all—Belly fat.