Coconut oil for fat loss – Why you should be eating natures fat burning, super food

Who’d have thunk it — there’s a fat out there that will actually aid in the fat loss process. It almost sounds like science-fiction.

“Yeah buddy, eat fat and lose it. Next you’ll be saying you can eat hair and lose that too…”

Let’s delve into the seemingly magical world of coconut oil for fat loss… Firstly, these are the claims that this ‘super-food’ appears to possess:

Yes coconut oil is very high in saturated fat, but it’s made up of a unique saturated fat called medium-chain triglycerides, or MCT’s.

MCT’s have some incredible unique properties: they do not need bile to be digested, they are digested and absorbed intact rather than broken down, and they’re more likely to be oxidized as fuel rather than stored as fat.

One of these MCT’s is a fatty acid called lauric acid. Lauric acid makes up about 44% of the fatty acid content of coconut oil. It’s converted into monolaurin in the body, which has powerful antimicrobial and antiviral properties.

It makes a great addition to stir-frys, omelets, and shakes (the last of which I can personally attest to). 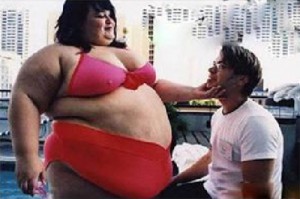 “Have you seen my coconut oil little man?”

So coconut oil reduces fat how?

It contains short and medium-chain fatty acids that aid in the fat oxidization process. It is also easy to digest and it helps in healthy functioning of the thyroid and enzymes systems.

Further, it increases the bodys metabolism by removing stress on the pancreas, thereby burning more energy.

^In fact, a randomized double-blind clinical trial with 40 women exhibiting obesity found that supplementation with coconut oil promoted a reduction in obesity without causing dyslipidemia.

Do all lose fat while using coconut oil?

No. Coconut oil is NOT the fat-burning solution to all of your problems. Like every other supplement, it will ‘help’ you on your way but shouldn’t be relied upon as a single solution. Your training, diet and rest all make up equal parts in your fat burning strategy.

If you’re hoping to just down a few teaspoons of coconut oil a day and watch the fat melt away, you’ll be sorely dissapointed.

Which type of coconut oil should I buy?

Just like with butter, the source of the coconut oil is of utmost importance. I’d recommend the unrefined organic extra virgin type, as it has undergone the least amount of processing and should provide you with the most benefits.

Whilst I’m in the early stages (read first week) of trialling this stuff, I have to say it HAS made my morning shakes a lot more interesting. Suddenly there is a punch of coconut flavour in the mix as well as a ‘thicker’ consistency to each one. My girlfriend sampled the shake and even SHE was impressed by the taste (for the first time ever mind you).

In regards to my own fat-loss benefits attained from consuming a teaspoon of coconut oil every few days. Stay tuned!

Editor’s Note: Do you use coconut oil for fat loss? Comment below.