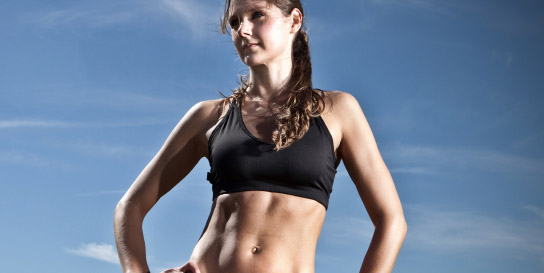 Is getting the body of a Hollywood star achievable?

We’ve all seen plenty of movies and think to ourselves…

“How come I spend literally HOURS in the gym, and yet can’t achieve a body that looks even remotely like a Hollywood actor?”

The Photoshop effect in Hollywood

Who isn’t aware of the Photoshop work that goes into movie posters and magazine covers. What about movies then? Surely, what we see on the big-screen is real? How can you Photoshop video?

Well you can, but there are several other things you need to take into account which have a serious impact on what we see on the big screen. 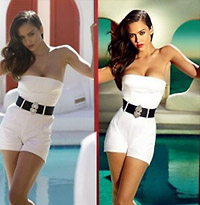 Good lighting does half the work…

Let me use weight-loss adverts and supplement endorsements as an example whilst I explain the following.

Ever noticed how before and after photos have SIGNIFICANTLY different lighting? The before shot is always blown out with way too many highlights and no definition in the shadows. This makes people look flat, shapeless and quite often, appear as if they had never set foot in a gym.

The after shot is a completely different kettle of fish. Down-lighting is used which gives each muscle a well defined edge making the subject appear a lot more ‘toned and ripped’.

If we apply the same logic to film, we can see that the lighting on a movie set is of paramount importance. Making an action star look ripped is a lot easier if lighting trickery is used. With perfect editing and ‘grading’, you can boost the contrast of the film making the stars look more defined. Suddenly a Hollywood body seems a lot more achievable doesn’t it? 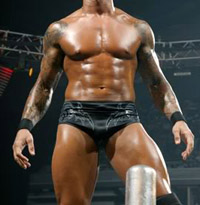 Grease me up with plenty of oil

Actors and actresses are often covered in a layer of baby oil. This simple addition gives the appearance of fuller muscles with a dramatic increase in definition. 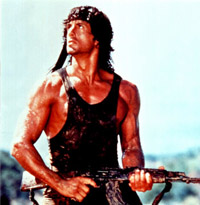 Sly looking a lot ‘larger’ due to the low camera angle

Sly Stallone is 5’7inches tall – which is a significantly small stature by today’s standards. Then how come he appears HUGE in all of his movies? The camera was shot from below the chin level to give the perception that he was taller than he was and therefore a lot ‘bigger’.

Hugh Jackman admitted this himself when he was filming Wolverine. There used to be a set of dumbbells on set which he would use prior to EVERY take to make sure he had a full ‘pump’ of blood to his muscles. This would have to be the quickest way to add an inch to your biceps. 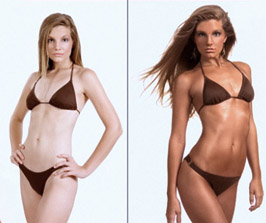 This is the same model. Being tanned really aids in muscle definition.

Here’s a question (largely subjective) – Who looks better at the beach. The skinny tanned girl or the muscular toned white girl? The tanned girl will usually look more defined and muscular. Muscle tone is once again affected by the perception of shape. Lighter skin reflects more light into the observers eyes therefore making the tanned girl appear a lot more defined. 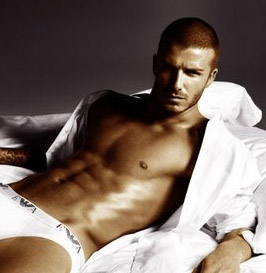 A hairless chest increases definition of the pectorals.

Pectoral definition can be hindered by chest hair. The more hair you have, the less defined you will appear. Not many action stars in the 80s especially, had a lick of chest hair. (this of course doesn’t apply to women!)

What else will help you achieve a Hollywood body?

Movie stars look the best that they can possibly look by the time you see them up on the screen. In addition to the above, they also have a hair stylist, a makeup artist, an on-set trainer, a nutritionist who makes sure EVERY meal is spot-on and they usually train for a role which sees them in a gym 6 days a week for 6 months.

Don’t feel disappointed the next time you sit in the cinema and find yourself in awe of the next ripped Taylor Lautner strutting his six pack. Sure he trains hard, but so do you. He just has a team of monkeys making sure he looks perfect at all times where as you live in the real world.

Is getting the body of a Hollywood star achievable? It sure is when you know the tricks!

Editor’s note: I’m sure this is just the tip of the iceberg. Do you know any other tricks that Hollywood actors use to be ‘photo-ready’ year round? Post them in the comments below.