27 Easy Breakfasts You Can Make in a Crock-Pot

By Clint NielsenOctober 27, 2015No Comments

Given the choice between sleeping in later and grabbing a power bar on the way out the door or getting up to make a real breakfast, oftentimes the snooze button wins. And then you're left with a sad, prepackaged excuse for morning fuel.

But there's a way to buy a few more minutes under the covers and enjoy a warm, hearty breakfast: Meet the Crock-Pot. Your sous chef for whipping up chili, stew, and other cold-weather meals, the appliance is also ideal for a.m. eats. Just load it up at night and let the magic happen while you dream, or prepare breakfast for the week over the weekend. Wake up the next morning, and all you have to do is grab a bowl or plate and utensils. 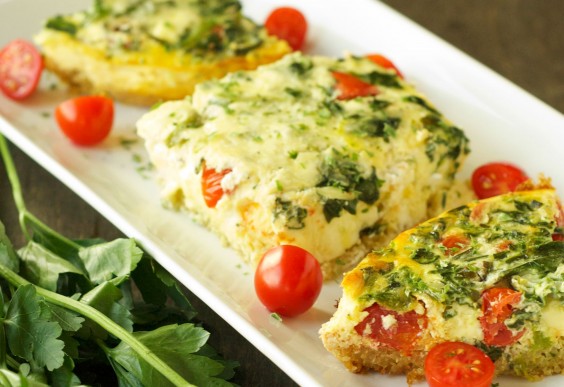 With just a handful of ingredients, including leafy green spinach and lycopene-loaded tomatoes, you’ll have a breakfast powerhouse at the ready. Whip this up over the weekend for a filling morning meal the rest of the week!

Sneaky cauliflower is at it again, and this time it’s taking on hash browns. Shred the cruciferous veggie, then layer it in a slow cooker with beaten eggs, onions, sausage, and cheese. The result? A fluffy, savory mix that's super satisfying but won't leave you with a food baby.

It doesn't get any better than pie for breakfast. What sets this one apart is the addition of vitamin A and C-rich sweet potato for an extra nutritional boost. Throw in your favorite veggies—might as well use up what's in the fridge while you're at it, right?

OK, so it's not the healthiest, but sometimes you just want those little potato nuggets. With naturally lower-fat Canadian bacon, cheddar cheese, and eggs, this tastes like a much better version of an Egg McMuffin. We love it for mornings when you’re feeling the effects of too many cocktails, but load it up with your favorite vegetables to enjoy any day of the week.

Can’t ever make up your mind at the diner? All the breakfast faves are in this one casserole: eggs, hash browns, bacon, and lots of veggies. In four hours, the eggs take on a spongy consistency—light yet filling thanks to all the protein.

This healthy casserole combines zucchini, mushrooms, and tomatoes with eggs and sausage, plus two kinds of cheese: cream cheese to permeate the whole thing with gooey goodness, and shredded Mexican cheese on top to be 100-percent certain that every bite oozes. It’s a hearty dish that’s perfect for feeding a crowd at brunch or reheating for breakfast throughout the week.

Oatmeal and Other Grains 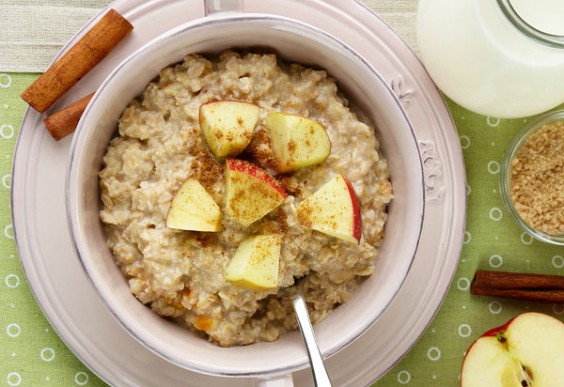 You’ve likely eaten caramelized onions before, but how about caramelized apples—not on a stick, that is. Cooking the apples on low heat for a long time makes the fruit super sweet. The best part is that the method works just as well with other fruits: think peaches, berries, or cherries.

You can master shrimp and grits even if you didn’t grow up in the South. Shrimp are a source of omega-3 fatty acids and, when mixed with three cheeses and grits, irresistible. This one requires adding the crustaceans later, so make it on a weekend, have some for dinner, and save the rest for workday breakfasts.

When you’re past the age when it's acceptable to choose chocolate puff cereal but are still jonesing for some chocolate flavor, this oatmeal has your back. Cocoa powder, coconut milk, and oats cook in the Crock-Pot; brown sugar, shredded coconut, and chopped pecans take it over the top.

Dried cherries don’t get the attention they deserve. They’re easier to cook with than fresh ones (no pits!), they’re full of beta carotene (essential for healthy vision), and they taste great! Enjoy them in this overnight oatmeal, along with flaxseed for more staying power, fresh apples, and a dose of brown sugar.

If you’re a fan of carrot cake and zucchini bread, you’ll love this oatmeal. It's overnight oats, but warm—and perfect for those mornings when it's so cold you don't want to climb out of bed. Nutmeg and cinnamon spice things up, while pecans add some healthy fats and crunch.

Turn apple pie into breakfast with this crumble. With just two apples, a cup of granola, and a few other common ingredients, you’ll have breakfast for three days after cooking once. You can let it cook for up to eight hours, but if you get up in the middle of the night, give it a stir so it doesn't burn.

Running out of ways to cook quinoa? Impossible. When mixed with steel-cut oats, the ancient seed turns into a fluffy breakfast that’s waiting to be devoured. The toppings really make this one, though: your favorite berries (we’re partial to a blueberry-strawberry combo) with a sprinkling of cinnamon.

Skip those flavored packets the next time you’re craving a sweet oatmeal and make your own instead. This fruity version, featuring peaches and blueberries plus vanilla and cinnamon, is a winner. Bonus: it requires no prep work the night before. Just throw all the ingredients in the slow cooker and let them do their thang until the a.m.

This one tastes so good you’ll swear it’s bad for you—yet canned pumpkin is loaded with vitamin A. And while this recipe does call for brown sugar and butter, there's not too much. Eat this early in the fall before you reach pumpkin-everything fatigue.

Why take three hours to cook banana bread oatmeal in a Crock-Pot when the bread can be ready in a third of the time? Because this one is sweetened only with the fruit, and the chia seeds ensure you get lots of filling fiber in every bowl.

No need to worry about flipping or burning this omelet; it’s all safe in your cooker. Not only is it cheesy and delicious, but it also helps you work toward getting your veggies for the day. While the recipe calls for broccoli, peppers, and onions, any vegetables you have on hand would work nicely. After less than two hours, top with freshly grated cheddar, chopped tomatoes, and parsley, and you have a breakfast that looks like it’s from a restaurant but costs way less.

Who doesn’t want to wake up to burritos? Use frozen or fresh diced potatoes, add your favorite veggies, toss in ham or another breakfast meat, and season to your liking (Sriracha would be delish here). It’s really the perfect base recipe to tweak as you see fit. Eat as is or wrap it up in a tortilla.

Frittatas can be made on the stove or in the oven, but in a slow cooker, the eggs turn out softer in texture and bursting with flavor. Baby kale and roasted red peppers add color (with antioxidants to boot), and then there's the tangy feta. Ready in two to three hours, this dish is great any time of day.

When you're dragging, there's no better way to add some pep to your step than this spicy premade meal. Let it cook for a few hours on Sunday, then wake up, heat up a slice, and top with avocado and salsa (be sure to use both to help your body absorb more carotenoids from the peppers and more lycopene from the tomatoes).1

Five everyday ingredients make up this delightful no-crust quiche that’s ready in four hours with no hands-on time. The original recipe is great, but this one’s easy to make your own: Mushrooms would work well, as would crushed red pepper for heat and some Italian seasoning for a little extra flavor.

22. Frittata With Zucchini, Tomato, and Feta

Zucchini has proven it belongs in almost anything—including this frittata that's easy (three steps!) yet flavorful, thanks to sweet paprika, thyme, and parsley. One note: Grease your Crock-Pot with nonstick spray to make cleanup a snap. 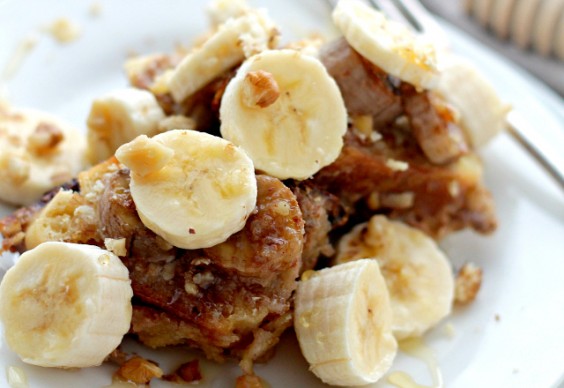 Layer bread, cream cheese, potassium-rich bananas, brown sugar, and walnuts in your slow cooker, then drizzle with a mixture of milk, honey, cinnamon, nutmeg, and vanilla. The hard part: waiting four hours for it to turn into a dreamy meal. Why not work up an appetite by hitting a new gym class?

This yummy bread makes some smart swaps: a mix of white and whole-wheat flour, olive oil instead of butter, and maple syrup instead of refined sugar. Adding in walnuts and crystalized ginger makes this pumpkin loaf something you’d expect to see at a bakery—not coming out of the slow cooker. And it's ready in two hours.

Forget Cinnabon or refrigerated rolls. You can make homemade cinnamon rolls, complete with a sugary frosting. While it’s slightly labor intensive—you need to roll out the dough and slice into rolls before popping them into your slow cooker—and it takes 90 minutes to cook, it's so worth it. Save this one for a special occasion morning or even dessert!

No more fussing with oven times or burning bread. This banana bread practically makes itself in the slow cooker in just four hours. While it’s not an everyday breakfast choice—there's a bit too much sugar in it—a loaf is great to have on hand for guests or a potluck brunch.

Made with a dough that doesn’t require rising, these sweet rolls are awesome for brunch (or dessert). They’re healthier than store-bought versions thanks to whole-wheat flour and all-natural ingredients, but don't get us wrong: They're not health food. Still, the fresh caramel sauce is out of this world. Make a double batch because these will go quickly.