By Clint NielsenOctober 20, 2015No Comments

Ah, Halloween… the one day a year that eating candy is actually encouraged. From entire supermarket aisles to office reception desks, the sweet stuff is everywhere. Take one look at the labels, however, and you’re sure to find some pretty spooky ingredients. We searched some of our favorite food blogs for healthier, homemade versions of some of the most popular Halloween candies.

Remember that most of the candies on this list aren’t exactly healthy (they are sweets, after all), but these recipes—from Snickers bars to Twizzlers—are better for you than the store-bought versions since most are free of preservatives, high fructose corn syrup, and artificial dyes. Plus, dark chocolate is in fact good for us with all those antioxidant flavonoids (lottery!). Get your apron, mixing bowls, and witch hat ready. We’re about to take Halloween by storm. 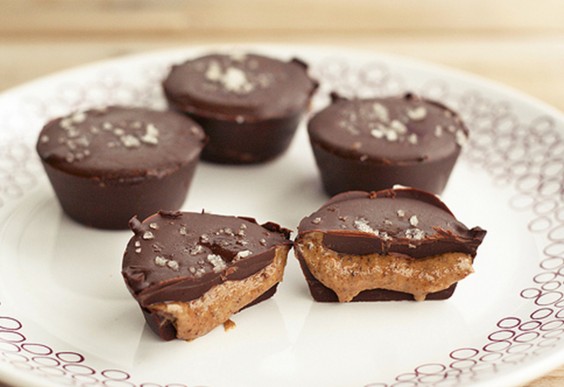 Photo: Tasty Yummies These treats are constructed in a mini muffin pan, so they look just like the classic peanut butter cup. Instead of peanut butter, the chocolate shell is filled with a mixture of almond butter and ground chia seeds. Maple syrup sweetens the dark chocolate outside, while a little bit of coconut oil makes the final product easier to bite into. 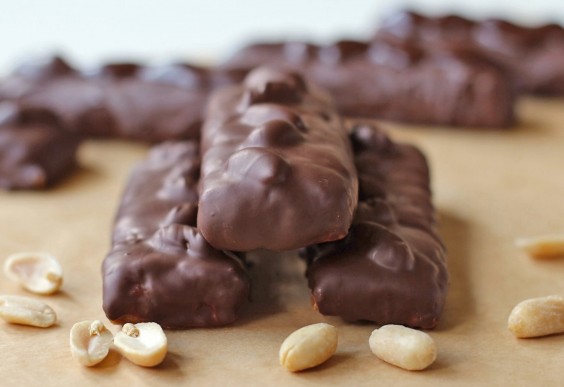 This Snickers makeover is full of protein and fiber but still actually tastes like a candy bar. The base of the bar combines natural peanut butter, oat flour (pulse oats in a food processor or coffee grinder to make a DIY version), and vanilla protein powder. While this recipe uses brown rice powder, feel free to use your favorite plant-based or non-plant-based protein. The second layer also features protein powder as well as peanut flour and a homemade caramel sauce. Dip the bars in melted dark chocolate and just try not to eat them all at once (or else you’ll turn into the Hulk!). 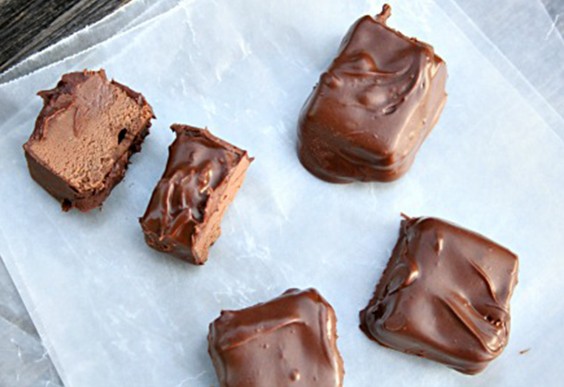 While this do-over does include a couple days' worth of sugar, it’s still a bit healthier than the original version, which features hydrogenated oils and artificial flavors. To achieve the fluffy consistency of a 3 Musketeers bar, whip the egg whites and sugar syrup to incorporate air into the filling. For a recipe that’s a touch healthier, choose dark chocolate instead of milk chocolate to coat the nougat. 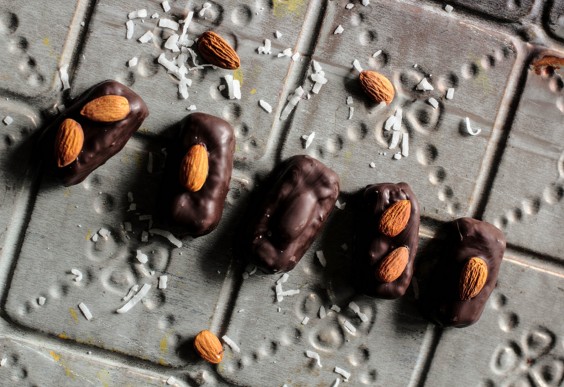 Of the candy copycats on this list, these Almond Joy imposters look most like the original. They’re fairly simple to make too. Toss unsweetened shredded coconut, coconut oil, honey, and vanilla extract into a food processor until it becomes a thick paste. Here’s the fun part: Shape the coconut mixture into small rectangles and place an almond on top of each bar. Freeze them for a bit, then dunk ‘em into a pool of melted dark chocolate. 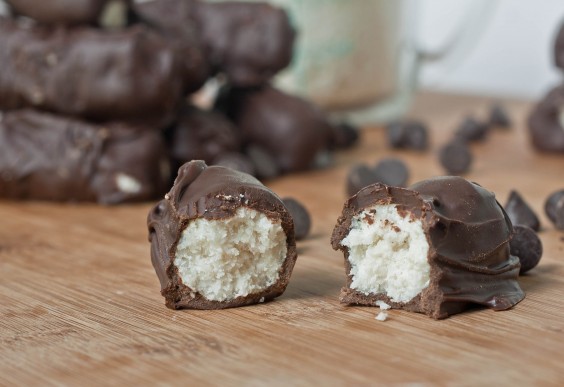 Just like the faux Almond Joys above, making this candy bar is a hands-on process. Once you’ve molded the coconut bars, allow them to set in the freezer before dunking in chocolate. Feel free to decrease the amount of powdered sugar and liquid sweetener, since shredded coconut (even the kind without added sugars) has a slightly sweet flavor on its own. 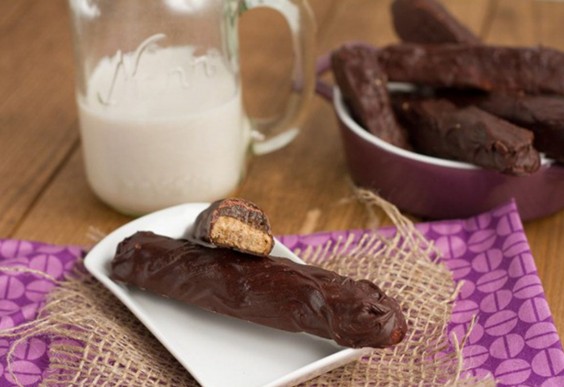 These gluten-free, dairy-free, nut-free, egg-free candy bars sound too good to be true (even for people without allergies or intolerances). Gluten-free flours create the shortbread, while sunflower seed butter (known for high levels of the antioxidant vitamin E), coconut oil, and a flax egg hold the mixture together. The “caramel” is actually made of dates, sunflower seed butter (or any other nut butter), and vanilla extract. A dunk in dark chocolate and it’s done! 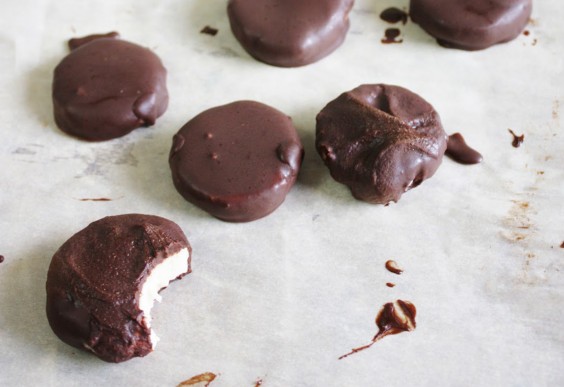 These patties aren’t just made of powdered sugar and peppermint flavoring—actually, they utilize some pretty unexpected ingredients. Mix up dried coconut, cashews, coconut oil, plus honey and peppermint oil to make up the base. For a spicy, grown-up remix, add a smidge of cinnamon and cayenne to the chocolate coating. 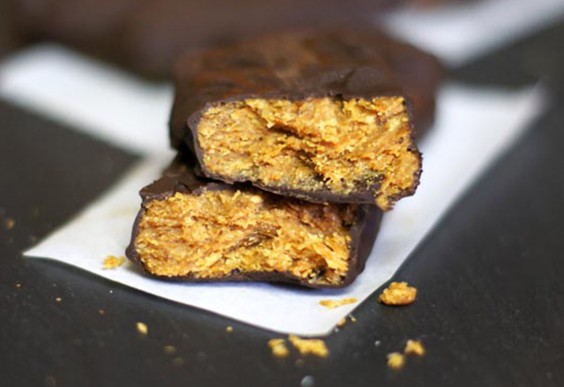 These can’t-keep-your-hands-off-‘em candies are sweet, crunchy, and better for you than the original toffee bars. You’ll need a candy thermometer to make sure the sweetener doesn’t burn. Since things may get a little sticky, it’s best to coat the saucepan with butter or coconut oil, use parchment paper when cooling the peanut butter/maple syrup mixture, and oil up a sharp knife before cutting the bars. 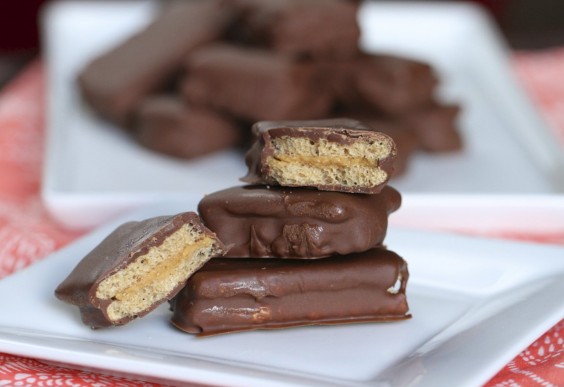 This candy reconstruction is one of the easiest on the list (kitchen newbies, rejoice!). To replicate the crunchy wafer layers without all the sugar and butter, this recipe uses Wasa 7 grain crackers. Spread vanilla-infused peanut butter between the crackers then freeze until set. If you’re looking for a bar with less sugar, ditch the powdered sugar when preparing the peanut butter filling. Finish your masterpiece by dunking each piece in dark chocolate. 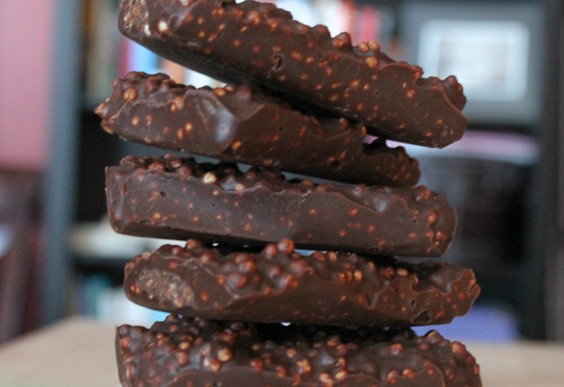 To remake a Crunch bar the healthy way, this recipe uses puffed quinoa (puffed brown rice or puffed millet make good substitutes too). The remaining ingredients include coconut oil, cocoa powder, and almond butter (plus vanilla and maple syrup for flavor). And if your kitchen is missing a mini loaf pan, use a baking sheet or cake pan instead, then slice with a greased knife once the chocolate mixture has set. 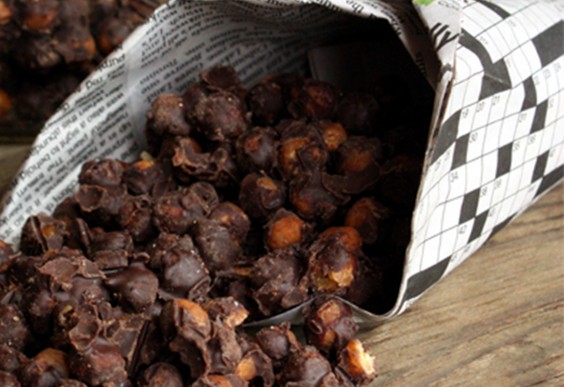 Bear with us on this one. These malted milk balls aren’t malted milk balls at all, they’re actually chocolate-covered roasted chickpeas (what?!). This gluten-free, grain-free, vegan candy is pretty darn healthy, since it features fiber-filled chickpeas as the main ingredient. The balls aren’t perfectly round, so be prepared for a rough-around-the-edges but still delicious snack. 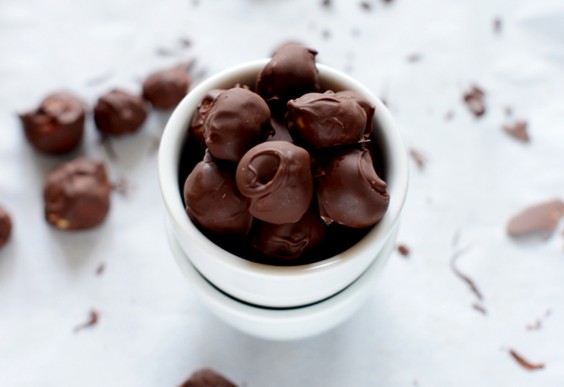 Peanut butter M&Ms are sinfully good, but this homemade recipe does a good job of removing some of the guilt. The filling incorporates oats, dates, peanut butter, almonds, and peanuts (instead of preservatives, sugar, and peanut butter). The faux-Ms are simply dipped in chocolate, with no artificially colored candy coating. Don’t worry about making perfect little spheres… we won’t tell anyone if your M&Ms look more like golf balls. 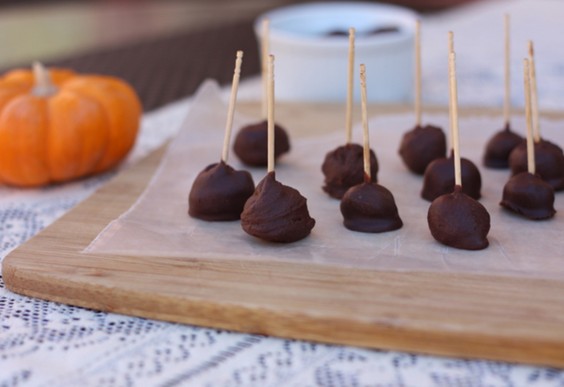 Photo: Oatmeal With a Fork

Buttery caramel slathered in soft milk chocolate—it doesn’t get much better than that. To make a healthier version of caramel, combine almond butter, maple syrup, coconut oil, and coconut milk. Heat the mixture until bubbly and then it’ll simmer down and thicken up (just like the real stuff). Roll the cooled “caramel” into small balls and coat them in chocolate (do you see a trend here?). For easier nibbling and less mess, pop a toothpick in each dud. 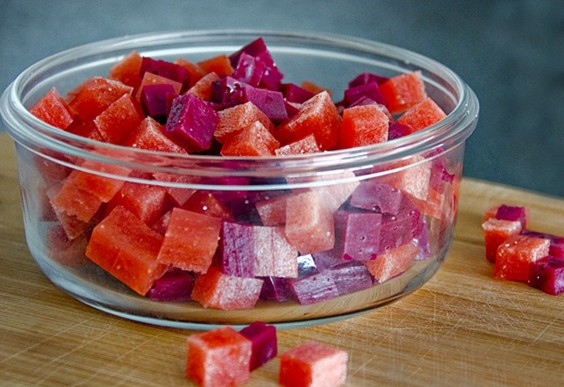 Fruit snacks aren’t typically considered candy, but with corn syrup often listed as one of the first ingredients, they certainly belong in the sugary-treat category. Ditch the store-bought gummies for a healthier version that uses grass-fed gelatin (regular gelatin works too), honey, and zero artificial dyes (the fruit provides the color naturally). Feel free to get fancy with small cookie cutters, candy molds, or ice cube trays for fun shapes, or simply cut the DIY fruit snacks into squares. 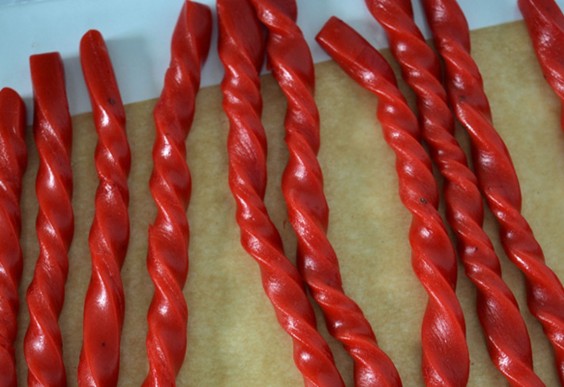 Photo: Gluten-Free On a Shoestring

Since most licorice uses wheat flour as a stabilizer, it’s a no-go for gluten-free eaters. This homemade version takes care of that problem by using gluten-free flour. To get the iconic spiraled look of Twizzlers, twist the strips of candy at both ends. Make sure to use a candy thermometer so the licorice cools to the right consistency. 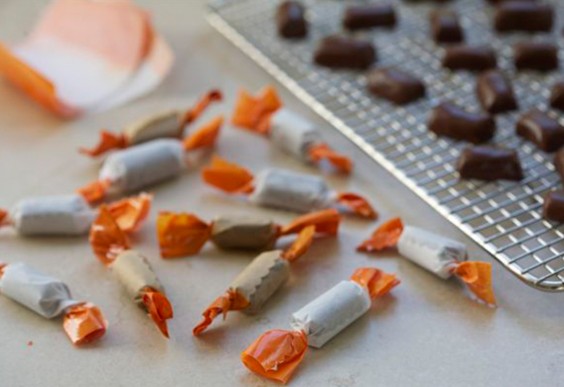 These grown-up Tootsies are less sweet but more chocolaty than the original nougaty tubes. All it takes is a little sifting, stirring, rolling, and slicing to create this old-school candy from scratch. Eat them as is, or wrap in parchment paper (then twist both ends) for a real Tootsie Roll experience.